Checo faced off against NASCAR racer Aric Almirola in the first in-game crossover between the two series, with veteran Rocket League players Shock and Widow teaming up with the Red Bull Racing driver to help guide Perez through his debut in the game.

Meanwhile over on Team NASCAR, Almirola was partnered up with Arsenal and Tri House as the two teams battled it out on regular mode before hopping over to the new ‘Speed Demon’ match – where there’s unlimited boost and instant demolition when you touch an opponent.

A best out of three series saw Team F1 lose the first game, but Checo quickly found his feet, after admitting this was his first time playing, and helped his team claim the W with some decisive moments in Game 2 and 3.

An audacious, and definitely not accidental, backheel assist from Checo set up his team mate Shock to put F1 into an unassailable lead in the second match.

Now on the front foot, Checo wasn’t afraid to dish out some friendly trash talk, “at least i had a shot, I see Aric had zero shots!”

In the deciding game Checo, now with the knowledge of how to jump, rose above the competition to tee up Shock to see out their second victory.

With only one game to decide the victor of this mode, Team F1 were straight off the line and sped into a two-goal lead

With unlimited boost and plenty of demolitions in the game, Checo targeted the rival pro player Arsenal to great effect.

“Arsenal, I really thought you were better than this!” Chuckled Checo.

The game ended in a 2-0 win for Team F1 as they took victory for the entire Speed Demon Showdown!

“I really have to practice!” Explained Checo after the match, “but I really enjoyed the game!”

The F1 Fan Pack is back in the Rocket League store and you can play the ‘Speed Demon’ mode for a limited time.

The post WHEN F1 TOOK ON NASCAR IN ROCKET LEAGUE! appeared first on F1Esports News. 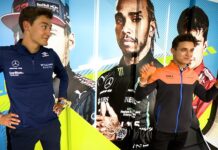 Lando Norris and George Russell race their own AI!