Many challenged. Some put up a good fight. But with three victories, Nobody could resist the speed of David Tonizza! The first Pro Draft pick of 2019 led the 2019 F1 New Balance Esports Pro Series almost from start to finish. And he claimed his reward in the very last race of the season in Brazil, to become F1 Esports Pro Series champion.

It wasn’t an easy road, however. In fact for the first time, the likeable Italian lost the lead in the championship – with just once race to go. Frederik Rasmussen displaced him for the lead heading into the final race of the series, with just four points separating the title rivals. Twelve races, and it all came down to the very last one!

Red Bull Racing Esports made it very clear that they were here to win in F1 Esports. Their driver line-up was shuffled pre-season, bringing Rasmussen over from sister team Toro Rosso, and they retained the rapid Joni Tormala too. Throw into the mix up-and-coming racer Nicolas Longuet, and it’s a powerful roster indeed.

The team had a tricky start to 2019 with a non-score in Bahrain. But that false start preceded an unbroken streak of 11 points finishes in a row, including eight podiums, and three wins.

Rasmussen laid down a marker in the opening race of the event, storming into an unassailable lead early on. The undercut was in full force in this race, with many drivers opting to pit early. The biggest beneficiary of this strategy was Lucas Blakely. After making his debut at the previous event, he was on the hunt for points. And he accomplished that in a major way, emerging in second place after the stops.

He had to fight hard to hold on to it, with pressure from Toro Rosso’s Patrik Holzmann relentless for the final few laps. But the pair held their own and took their first rostrum appearances of 2019. Tonizza crossed the line a fine fourth, with overtaking at Suzuka extremely difficult at the best of times. While it wasn’t the end of the world, he lost 13 points to Rasmussen. And that became 14 when the Dane set the fastest lap on the very last tour of the circuit. With Opmeer down in sixth and Bereznay out of the points, our quartet of contenders became a duo. Rasmussen versus Tonizza.

If Suzuka was a dent for Tonizza’s title charge, the USA was perhaps a very serious crack. Rasmussen took his third win of the Pro Series in fine style at the Circuit of the Americas, with his Italian rival once again off the podium.

Tonizza proved in the first three events that he had nerve and resolve by the bucketload. But at COTA, he cracked for the first time. He was hit with a three-second time penalty for exceeding track limits. And it was a reprimand that would drop him from P3 on the road down to sixth come the chequered flag. With Rasmussen taking another dominant win… Tonizza lost his championship lead for the first time.

The standout drive of the race – and perhaps the entire event – was that of Jarno Opmeer. The Flying Dutchman rocketed past Alvaro Carreton, Dani Bereznay, and Brendon Leigh in three consecutive laps, and almost challenged Tonizza for the final podium spot on the very last lap. He was however overzealous in his final move and made minor contact with the Hublot Ferrari Driver Academy racer, and was hit with a one-second penalty by the stewards. He dropped to fourth, with Leigh taking only his second podium of the season.

Rasmussen was unstoppable, and he shot into a four-point lead for the final race of the season. His performance also sealed the Teams’ title for Red Bull Racing Esports, with a lead too great for challengers FDA Hublot and Renault Vitality to close.

Who doesn’t love a good old fashioned titles decider in Brazil? The Interlagos Circuit has seen championships won and lost on the track many a time in Formula 1. And for the first time ever, the F1 Esports Pro Series to get its share of the action too.

With Bereznay and Opmeer eliminated from contention, it was just a two-horse race between Rasmussen and Tonizza.

Rasmussen was due to sit the final race of the season out. Nicolas Longuet was pencilled in for the finale – but the shot at the drivers’ title was too much of a great opportunity. So despite not having practiced the Interlagos track, Rasmussen stepped back in as his team mate sportingly stepped aside.

Wet qualifying certainly shook up the order. Tonizza took pole, but the damp conditions saw Rasmussen mired down in P7. The positions stayed as they were at the start of the race, but Frede made a bold – perhaps too bold – decision to pit at the end of the first lap.

The writing was on the wall for him just a few laps later, as he was demoted to an unlucky 13th position by Lucas Blakely. Tonizza meanwhile battled at the front of the field with Dani Bereznay, who was keen to send the 2019 Pro Series out with a bang. He made a dream maneuver around the outside of Tonzilla at the end of the first lap, and the pair sparred right until the chequered flag.

Rasmussen made some progress as the pit stops re-shuffled the deck, but come the chequered flag it was Tonizza P2, Rasmussen P10. Cue emotional team radio and tears from the emotional FDA Hublot team. Their first foray into F1 Esports paid off in the very first year, and their champion is already a household name!

So, it’s David Tonizza who finishes the incredible 2019 F1 Esports Pro Series on top. From racing in his bedroom, to becoming the first pick at the Pro Draft, to settling in to the Ferrari Driver Academy family, and now winning the ultimate prize… it’s been quite a year!

Frede Rasmussen can be proud of his achievements – three wins, and he helped deliver Red Bull’s teams’ crown. Dani Bereznay also picked up a trio of wins, and established himself as one of the main players. Jarno Opmeer’s solid season puts him in the shop window for 2020 and beyond, as a force for the future. Outgoing champion Brendon Leigh would probably have liked to have put a win on the board, but evolution is essential here, and he’ll no doubt be pushing hard to get back to his best for 2020.

Over in the team standings, Red Bull Racing Esports set the standard for all. It was a close-run fight for third, with Alfa Romeo Racing Esports and Renault Vitality trading positions all season long – and the midfield was as densely-packed as you could ask for. 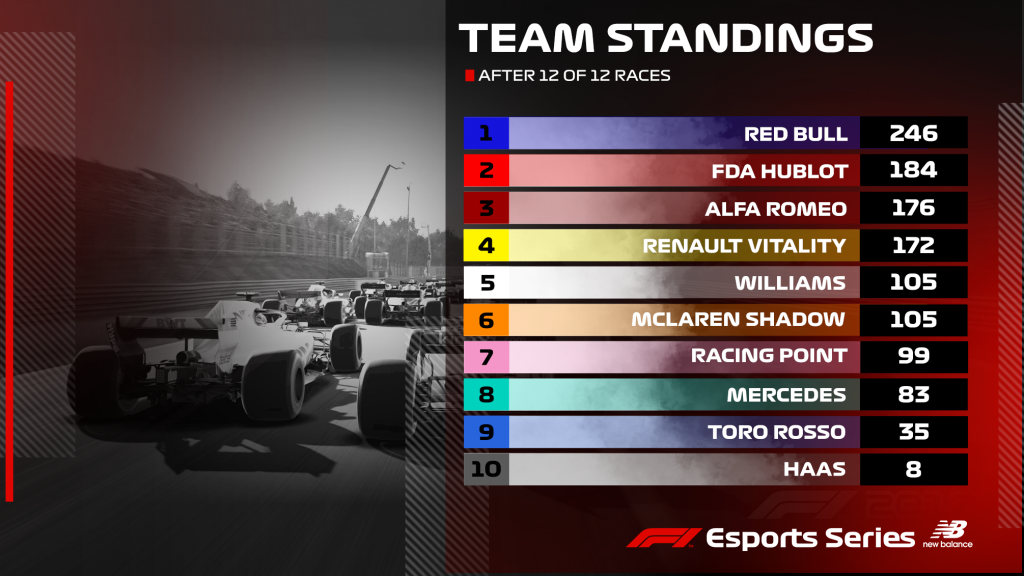 Thank you for joining us for the 2019 F1 Esports Pro Series. Who’ll be top dog in 2020? We’ll find out soon enough, as our search for our next champion continues in 2020…