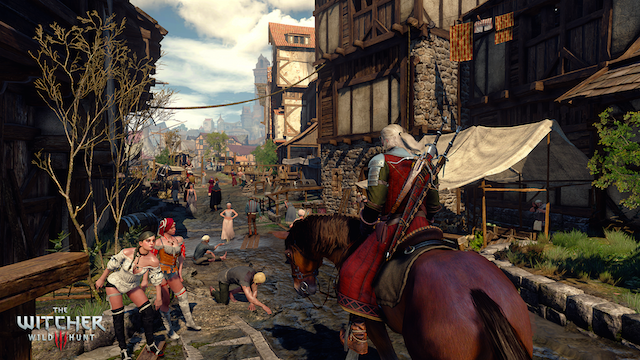 Games don’t get much better than this

With the Witcher 3: Wild Hunt, CD Projekt Red’s saga has grown into something magnificent. It’s a game of truly epic scale that still displays an eye for every minute detail. It’s one that sees its hero, Geralt of Rivia, fully transformed from the sword-swinging Mr Loverman of the first game into a mature, reflective hero, and one where story, systems, art, music, action and lore all seem to mesh together into one dazzling whole. It’s the best fantasy RPG of its type since The Elder Scrolls V: Skyrim, and sets a new benchmark for the genre. To be honest, that’s all you really need to know.

All the same, you’re probably expecting more from a review than breathless hyperbole. Well, imagine a game that takes everything you love from The Witcher 2: Assassin of Kings, Skyrim, The Legend of Zelda from Ocarina of Time to Twilight Princess and Red Dead Redemption. That’s pretty much Wild Hunt. With the third Witcher, CD Projekt Red is playing in the very biggest leagues.

The Red Dead comparison might seem strange, but there’s something about Wild Hunt’s free-roaming gameplay that keeps bringing Rockstar’s western masterpiece to mind. It’s not just that Geralt spends a large proportion of the game on horseback – his faithful steed, Roach, rarely further than a whistle away – but that the focus on exploring the wilderness, discovering characters and missions gives it a similar kind of feel. Both games share a dark, cynical tone leavened by sardonic humour and a dash of hope. Both are tales of killers who, in some sense, yearn to be something more. Wild Hunt has almost endless possibilities, but it’s smart enough not to swamp you with them all at once. The initial section of the game threatens to hit you with the same mild disappointment you felt when you discovered that Dragon Age: Inquisition wasn’t doing one seamless world, but a series of linked, large-scale landscapes. Even Wild Hunt’s starter area is packed with story missions, beasts to slay and side quests, on a map we would have called huge ten years ago, but it feels a little constrained. Is this what an open world Witcher really means?

Yet CD Projekt Red is just getting you used to the systems; to finding noticeboards and taking on pest-control contracts, to getting from A to B on horseback and discovering what perils and hidden treasures lie en-route. You’re being eased into the game’s combat – fast, smart and tactical – and into its research and crafting: two things that other games make a chore, but Wild Hunt makes an integral part of the fun.

There’s been a lot of talk recently amongst the gaming literati about whether systems engage players more than storyline, but Wild Hunt binds the two together in ways that make the question seem nonsensical. Geralt has evolved from a surly young blade to a would-be father figure, on the trail of the woman he once loved and the closest thing they have to offspring.

To find them, he’ll have to battle men, beasts, spirits and otherworldly forces, while getting involved in intrigues that affect the fate of nations, yet it’s always clear what you’re doing and how it contributes to your aims overall. And if that means collecting herbs to brew potions to give you a fighting chance of taking on a murderous griffin, then that’s something you’re willing to do.

Related: Everything we know about PS5 Even levelled up, Geralt is a professional rather than a superhero. While you can win some battles just by wading in, hacking away and dodging quickly, you’re more likely to succeed if you go in prepared, stocked with potions and with your target’s weaknesses in mind. Perhaps the most impressive thing about Wild Hunt is how it makes light work of its most mundane elements.

It still has the classic hook of every RPG – fighting monsters to gain experience and loot to level up and upgrade to make you even better at fighting monsters – but it has other pleasures too, with incredible scope for exploration and quests that are well-scripted, varied and full of personality. Your faithful steed works brilliantly both as a transport and as a means of charging headlong into combat, and even here the game shows intelligence, both by limiting its effectiveness in battle through a fear gauge, and in having what’s effectively a cruise mode for gently cantering along the paths.

Yet it’s just when you think you’re getting the measure of it that Wild Hunt pulls the veil away, then tells you that you ain’t seen nothing yet. This still isn’t quite one single open world, but the largest areas are so huge that it effectively doesn’t matter, and each one comes crammed with so many story quests, side quests and incidents that you’ll spend half your time trying to prioritise what to tackle next.

And while you’ll be happy to spend hours trotting through the scenery on horseback, the fast travel options that seemed unnecessary in the prologue section now seem vital. Ditto for boats – an essential for getting from the main landmass to explore far-off islands. Words like sprawling and massive don’t do The Witcher 3 justice. There’s a real balance here, too, between the narrative-led gameplay and the more explorative, emergent stuff. The story missions don’t simply take you from one point on the map to the next, but give you threads to tease out and follow, so that you’re always in touch with the central storyline no matter where you are.

The only limitation comes down to your current level – each quest and side-quest has a recommended level, and we’ve found that you ignore these at your peril. Yet when Wild Hunt does put you on a story mission, it feels as detailed and cinematic as any linear action game. Dialogue scenes, set-piece action sequences and boss battles all seem to flow naturally into the gameplay, with a potency we haven’t always seen in previous Witcher games.
It’s held together by great music, strong voicework and an impressive consistency of tone. Fantasy doesn’t get much darker than it does in Wild Hunt, where the ongoing war between empires is constantly in the background, where the ordinary folk are clearly suffering, injustice runs rampant, and even a hero must sometimes turn a blind eye.

That doesn’t mean you can’t make a difference. There’s a real feeling that what you say and what you do is changing things for worse or better, even if it’s simply clearing a farmstead or a small port of monsters and letting the locals get back to their grubby, impoverished lives. The visuals, meanwhile, are just astonishing. The game’s landscapes are epic, atmospheric and believable, making superb use of vegetation, light, fog, cloud and colour. It’s the kind of game where you want to explore for the scenery alone. Yet the up-close detail is equally impressive, with textures and surfaces you can almost feel and facial animation that leaves Dragon Age: Inquisition’s in the dust.

Wild Hunt delivers a world of magic that you can believe in and characters you can believe in too. And if the series’ predeliction for dubious sexy stuff hasn’t gone away entirely, at least the needless cleavage and soft-porn groping doesn’t look so ridiculous or Thunderbirds-like this time around.

Causes for complaint are spectacularly few and far between. CD Projekt has done a fabulous job of all the basics, from inventory and quest management to crafting, that the interface barely bogs you down, but two steps to get to the map screen seems one step too far. Loading times are a little on the long side, though only a problem when you die or use fast-travel, and the frame rate falters occasionally on the PS4 version tested, particularly when you’re wandering around the world’s big cities.

Speaking personally, I’m also not a huge fan of having to repair weapons regularly, and having to travel back to the nearest blacksmith to get my gear fixed up is one chore I could do without. Still, repair kits are easily available, and some people like that sort of authenticity. In fact, Wild Hunt makes it palatable by placing accessible limited-time weapon and armour buffs for you to use while you’re there. In short, I’m only sweating about the smallest small stuff. And that’s just silly. The big stuff here is absolutely brilliant – and brilliant in a way that leaves you wishing that more games could be both this ambitious and this well executed without failing one way or the other. Sure, The Witcher 2 isn’t something you can pick up casually, requiring time, commitment and – well, a lot more time – but it’s hard to imagine anyone without a hatred of RPGs and fantasy regretting the countless hours they’ll put in.

With commiserations to Bioware and Bethesda, Wild Hunt is the new RPG by which all other RPGs should be judged. Not only has CD Projekt Red deliverered the largest and most convincing fantasy open-world we’ve ever seen, but a storyline, quests and systems that make it an incredibly compelling place to run, ride and sail around in. It’s the most breathtaking time sink you’re likely to play this year.

Mini Review: Hero must die. again – A Unique JRPG That's More Than The...