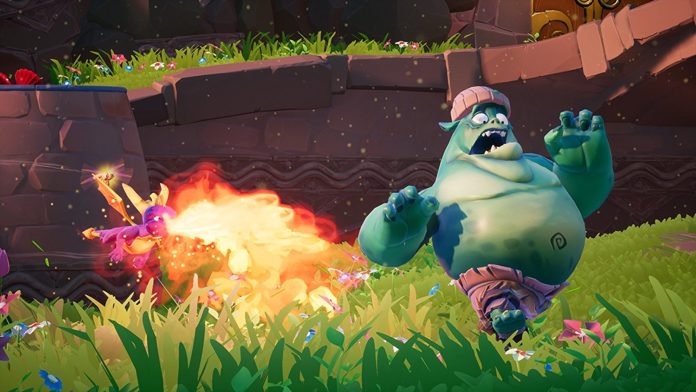 I wasn’t entirely taken with Crash Bandicoot N.Sane Trilogy. It enhanced three platforming classics with gorgeous new visuals and music, yet this only served to highlight its archaic platforming and finicky controls. I had similar fears with Spyro Reignited Trilogy, keenly aware that it looks wonderful, yet a faithfulness to the originals could be a noticeable detriment.

This is definitely the case here, but far less impactful due to how well the purple dragon’s platforming adventures have aged. Levels are sharp and accessible, a fascinating prelude to the likes of Ratchet and Clank and Infamous to come after it. Fans who grew up with Spyro will have a blast diving into this trio of whimsical titles.

Spyro Reignited Trilogy includes all three of our charming hero’s outings from the original PlayStation. The first title lacks a catchy subtitle, but after that you’ve got Ripto’s Rage (or Gateway to Glimmer depending on your location) and Year of the Dragon.

After an excruciating 68GB download on PS4 I was brought to a plain and simple menu where I could dive into all three games at my leisure. It’s really accessible, throwing you into each entry in a matter of seconds. Of course, I started with the first and my mind was immediately awash with nostalgia.

The tongue-in-cheek introduction as Gnasty Gnorc turns all the dragons to stone is still brimming with impeccable comedic timing, and I was genuinely shocked at how well the cutscenes transitioned into the modern generation.

Spyro is a wonderful hero, overwhelmed yet too willing to take on the task of freeing his scaly chums. In the original game, beyond collecting gems, this is the primary objective of each level. Discovering each dragon’s unique design is a reward in itself, each coming with its own funky attire and standalone personality.

Toys for Bob has expanded upon the vanilla experience here, applying graphical flair that was otherwise impossible back in 1998. This is when remakes are at their best, striving to be better instead of solely retreading the footsteps of the original creators.

Spyro the Dragon is the most simplistic of the three titles in terms of level design, but is still a treat to play, and rather short even if you’re keen to track down all the collectables. Ripto’s Rage is far more nuanced, acting as a clear sign of Insomniac’s first attempt to flesh out the fantasy world. Sure, it’s no Lord of the Rings, but a few extra characters make a world of difference.

Levels are also more diverse, partly because you’re no longer combing them for encapsulated dragons. Instead, you’re tracking down Talismans to access new worlds and eventually overthrow Ripto and his mischievous minions. Levels will contain a single Talisman and a variety of side-objectives, some of which will require an ability like climbing or diving that you might not have unlocked just yet.

I felt encouraged to revisit older levels thought left behind, all because the act of finding everything was so much fun. Spyro still controls exquisitely, a testament to the formula that still stands up after twenty long years. It’s very simple, with all enemies weak to a mixture of either fire or physical force.

But with such simplicity comes accessibility, which could polarise some players, yet I adored sitting back and smoothly moving through levels at my own pace. So, it’s a minor annoyance that some stages are an obvious stall to this pacing.

Sometimes you’ll be thrust into a level where you’re already gliding through the air, forced to find a series of collectables without making a single mistake. Trial-and-error marathons like this aren’t what make Spyro the Dragon so enjoyable to play, a blatantly obvious wrinkle on an otherwise sparkling package.

Ripto’s Rage and Year of the Dragon also bring myriad supporting characters into the fold, and most of them are wonderful. My personal favourite is Elora The Faun, who helps Spyro gather Talismans and provide essential advice across the hub world. She’s adorable, and an adequate case study for how what was previous a mess of archaic pixels can now be a bright and energetic bundle of joy.

Once again, Toys for Bob has taken a trio of platformers thought left in the past and expanded them significantly. However, purists needn’t fear as everything remains the same in terms of how you play. There’s even a modern and retro control scheme, if you’re so inclined.

For everything it does right, Reignited Trilogy does stumble in a few choice areas. There’s a distinct lack of options available, including the inability to switch off aggressive motion blur that was so prominent it gave me a headache.

The camera is also a bit of a nuisance, surfacing mostly when you’re trying to ram into an enemy at close proximity. It’s unusually hard to find your bearings, and the lack of an enemy lock-on mechanic feels like a huge oversight. It would’ve been a big departure from the original, but arguably improved things quite a bit.

With the world increasingly becoming a complete nightmare factory, nostalgia is the name of the game, and Spyro Reignited Trilogy delivers in generous spades.

Toys for Bob has done an excellent job translating the lovable dragon’s adventures to modern platforms, building upon the original outings with brave new additions.

A few minor blemishes aside, those looking for a delightful collection of platformers won’t be disappointed here.

The Top 10 Biggest STOMPS in Esports

This or That: With Kobe and The Cap