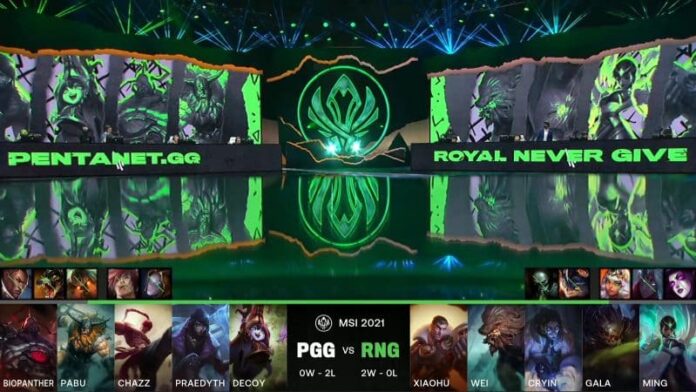 The first day of the Rumble stage brought us some memorable games. Can the second day bring the heat again?

One can rightly say that we learned a lot from the first day of the Rumble stage . We learned that RNG is not to be spoiled, that PSG and Pentanet still have a long way to go to reach the knockout stage, and that Europe is better than North America. On the second day, Cloud9 would face DAMWON, and MAD would face RNG, while PSG and Pentanet had a chance to leave the first day behind.

Pentanet.GG versus Royal Never Give Up

RNG got the game off to the expected start and took the first blood on the bot side. PGG managed to get one kill on the board, but it's short-lived as RNG caught them in their own jungle for another three kills. PGG made a big game on the bot side to catch Xiaohu, but the game failed when they couldn't defeat him. RNG then recorded a kill in the center lane along with an initial blood tower on top.

PGG recorded two more crucial kills while trying to stay in the game. With the Drake on the map, PGG and RNG traded one-on-one and picked up the Drake. Even though they are 3 miles behind, they looked closely in the team fights. Next, RNG forced a baron fight. PGG was too slow to react, but the post-Baron fight went exactly as they had planned. PGG crushed RNG, defeated four members and lost only two. RNG stayed ahead on gold, but PGG looked strong in fights. The next 5v5 started nearby, RNG pulled the trigger, but PGG was more than ready for it. The extended fight went the way of PGG, but unfortunately they couldn't take the baron.

The fight is prolonged and teleports fall on the rift when PGG is caught. RNG was pushed to its absolute limits and somehow managed to find the game-winning moment for Ace PGG. Despite PGG's best efforts, RNG took the match 3-0. 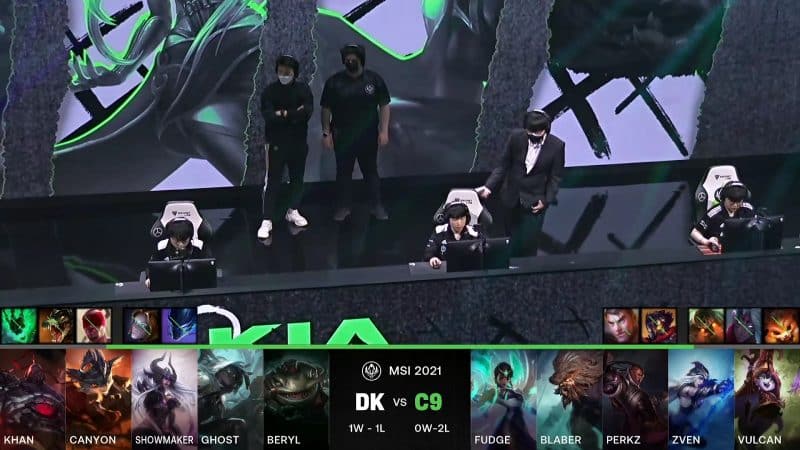 It was the ideal start for C9 as they got two quick kills on the bot side with the help of Blaber. Shortly thereafter, it's almost a rinse repetition for C9 as they bring the DK-Bot side to their knees again. This time they only got the one kill, but they are still 1km ahead. Minutes later it's the same lane, same result, as C9 won a 2v2 on the bot side this time. As a result, DK fell further behind.

The match eventually got its first 5v5 fight, going the way of C9. DK just wasn't in the races when C9 defeated two members, neither of whom were lost in response. C9 next pushed down the center lane and took the DK Tier 1 Tower. Nobody died of DK and they looked shocked. C9 took over the Drake and continued to extend the lead, but was soon caught. DK defeated Perkz, but the rest of the side escaped. In the next game, DK was all in for the C9 mid-lane tier 1, but they couldn't escape when C9 chased them and killed two members. Next, C9 switched to Baron and took down the target with no competition. However, DK found a fight in the lower river that killed two members of C9. With the spawning of the Soul Drake, DK delayed the game decisively.

For C9 it's the same story again, this time in the uppermost river. They were caught again trying to steal the blue buff and lose Perkz. DK continued the chase and picked up another kill, reducing the gold lead to 1k. Then DK played another amazing game of hiding in the Senna camouflage and surprising C9 by defeating two members with the sneak attack. Now the gold was almost balanced. Everything went wrong for C9 after DK defeated the Baron. The reigning world champions collapsed on the C9 base and cut off two members as they moved to the Nexus Towers. C9 had the game in hand but they let it slip and their nexus fell when DK switched to 2-1.

MAD Lions versus Royal never give up [19659029] A screenshot from the LoL Esports broadcast for the Mid-Season Invitational (MSI) match between MAD Lions and Royal Never Give Up (RNG). The champion designs selected and banned appear at the bottom of the image with a shot of the MAD players and coach at the top. ” width=”800″ height=”450″ />

RNG, which went undefeated, was a difficult test for MAD. RNG took First Blood after Humanoid was caught in the middle lane. It was almost a lot worse for MAD, but they managed to get the rest of their members out at the expense of three lightning bolts. While there were no more kills in the first 13 minutes, RNG went ahead with a better card game on 2 km.

The first major battle took place at the 16-minute Rift Herald. The long, drawn out fight somehow went three to three overall, despite MAD being caught on the lower side of the river. The fight was extended even further (after a chronopause) with MAD drawing a delayed ace as the fight progressed. RNG overturned a Baron when they lured MAD into the Baron's dentition. Poverty died early, and MAD could get a kill back. RNG went away with an almost free Baron kill as MAD was slow to react.

MAD defends itself, but its RNG against her.

Later RNG forced another baron. MAD wanted to stop them, but they just couldn't get close enough. This meant that with her second over-buff, RNG escaped and reset. With that, RNG began pushing in the middle and lower lane inhibitors, but MAD took advantage of this mispositioning. Cryin died early and when RNG tried to make something of the game they lost two more, with MAD losing only one. RNG was still well on top at this point, but MAD was showing signs of life.

With the Drake spawning on the map, Cryin TF invades the MAD base and tries to run it again. MAD somehow managed to win the battle of Drake again and defend what was left of their base. After that, RNG moved to claim their third Baron of the Game and tried to put an end to MAD's suffering for good. On their next push, RNG was able to find the pick that opened the MAD base. Despite MAD's best efforts, RNG were just too far ahead when they defeated MAD and continued their winning streak. After a tough game earlier in the day, it was the perfect start for C9 when they got off on their right foot and recorded First Blood. They followed with another kill top team when C9 wanted to end their current 3-0 run in the rumble phase. But from here the game got a little sloppy, which gave PSG an opportunity to get into the game. They picked up a key kill on Perkz in the center lane, but Blaber is able to get one back for C9 quickly.

Things continued to go into high gear although the C9 still maintained its 1k gold lead from earlier in the game. It was just over the 20 minute mark when Baron showed up for everything to go wrong. A 5v5 team fight in the middle lane went completely sideways for C9. Blaber got caught again and his team fell into the meat grinder around him when PSG got them going.

C9's gold lead was gone when PSG advanced to 3 km lead. C9 moved towards Drake and it's secured, but in the fight that followed it was again PSG who came out on top. They picked up four members of C9 and looked for what they could take. Immediately PSG rushed to the bottom lane of C9 and tore it apart. With only Blaber alive, C9 couldn't stop PSG as they had won a massive win. C9 lost again. 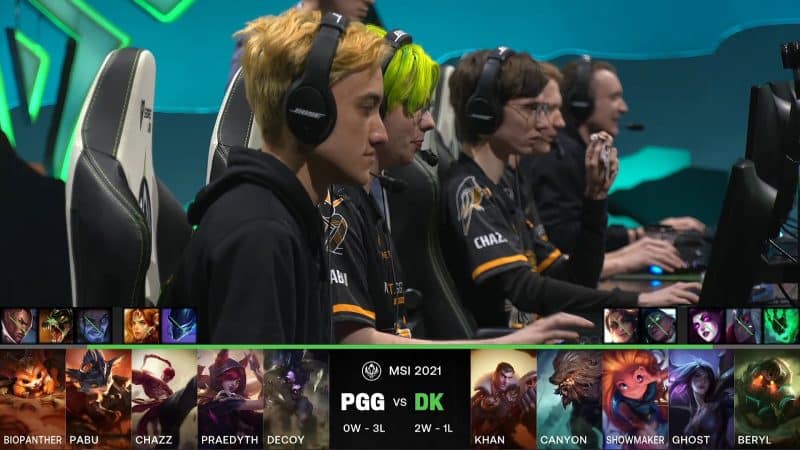 The fifth game of the day was undoubtedly an uphill battle for PGG. And it was the beginning that PGG would have feared when DK scored two kills early on. PGG had to climb a mountain from this point. In the 9th minute everything is DK when two more kills went their way. In all fairness, PGG looked almost different even at this early stage.

A few minutes of silence passed, but DK continued to build its gold lead over the period. In the 16th minute, all of the PGG outer towers had disappeared as the lead was extended to over 13 km. PGG tried a make or break game shortly thereafter, but they just got no damage. DK beat all five members and it looked like it was only a matter of time before DK went 3-1.

Too easy for DAMWON

Since Baron wasn't even on the map, DK moved the bot page to end the game. The first fight goes one on one, but DK repositioned themselves on the middle lane and defeated two PGG members along with the Inhibitor in the middle lane. After Rift Herald was dropped, DK defeated the PGG Nexus when PGG got to C9 on 0-4. 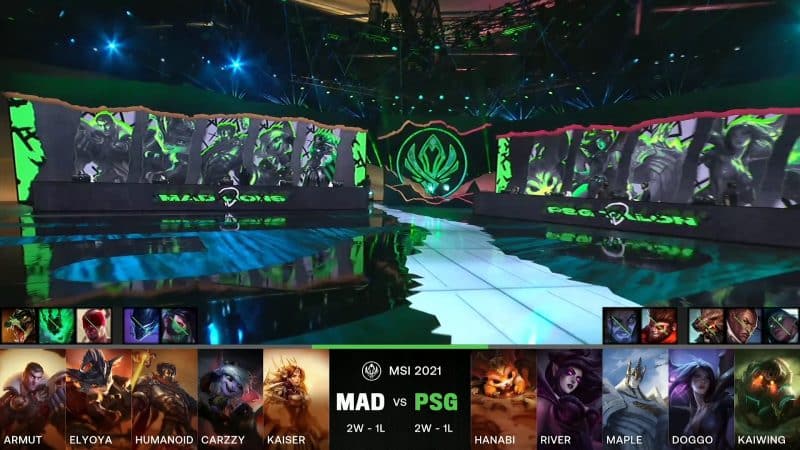 At the start of the last game of the day, MAD recorded a huge 2-on-2 first blood, but quickly lost two kills. MAD moved into Bot Lane a few minutes later, this time with the help of their jungle, and this time they didn't lose a kill in return. MAD started the game well, but made some mistakes. They dropped two avoidable kills on PSG as the gap closed to 1k.

As the game slowed down, MAD was able to easily expand its lead to 2.5k in the top lane after a highly effective Rift Herald fall. The game remained close, and the first big team fight should decide that. PSG took a positive step in the middle lane when an amazing max-range hook from Nautilus caught Carzzy and PSG turned him into a third Drake. Shortly afterwards another fight began in the uppermost river. This is where PSG got the early kill before the fight ended up being two-on-two, with PSG leading the way. Despite losing those fights, MAD retained a respectable 3,000 gold lead.

The next big fight was perfect for PSG at the beginning. They got the first kill to eliminate Elyoya, but Carzzy started rolling back Tristiana and he destroyed the PSG health bars so MAD could claim the Drake. Not done there, they moved to Baron and secured it for free to bring their gold lead to around 5,000. From here, MAD was moving with Baron on the underside, and the lower lane inhibitor fell off without PSG being able to defend it. Then MAD took the buff in the middle, and although Kaiser falls to PSG, MAD took one for their troubles. As MAD ran away, Gnar teleported behind them, but PSG couldn't make the game-changing game and only traded one-on-one kills. After MAD thwarted the attempt, he finally managed to take the mid-track jammer.

MAD, now without a baron, moved on top. PSG caught one member but it was the wrong one when MAD slaughtered the entire PSG lineup and their nexus to get 3-1 in the rumble phase. 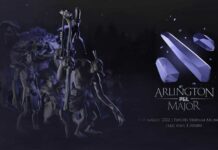 Recap of Day 1 of the Dota 2 Arlington Major Playoffs

What to expect from Call of Duty Next 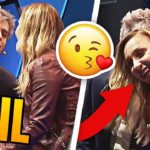 Esports - 2022-08-11
0
After an interview at Ninja's Fortnite Las Vegas Event, Ninja leans in for a kiss with his wife and gets hilariously rejected. This video...

Esports - 2022-08-11
0
After a few days of a very intense group stage, the Arlington major is advancing into the much-anticipated phase of the playoffs. ... 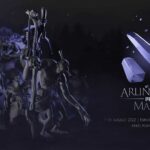 Recap of Day 1 of the Dota 2 Arlington Major Playoffs 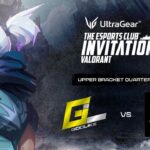 PS Plus DEAL: Cheapest PlayStation Plus prices for new PS4 and PS5 owners