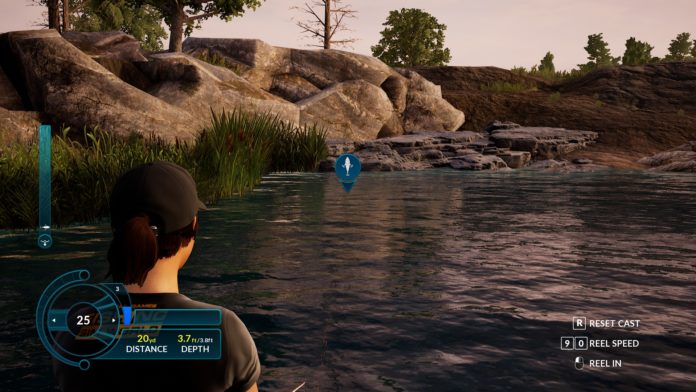 Fishing and video games have long made odd bedfellows for one simple reason. Fishing is a sport defined by an activity that can rarely evoke interest in video games; waiting. Out in reality, having little to do can be a privilege and indeed this is part of the allure of sitting by the water with a rod in hand. Taking in a lapping river, surrounded by rural beauty and away from it all – there are worse ways to spend your time.

Of course, fishing’s need for patience is also a counterpoint to the drama of a catch. Entrenched calm can suddenly give way to the hectic dance of reeling in a fish and netting it. Those moments can be heart-racing precisely because they’re a contrast to all that time deep in blissful nothing.

But how to make that work in a video game, where long waits are typically reserved for loading screens? The answer has often been to bend fishing away from reality to better suit the gaming form. From the unexpectedly beguiling pond-based mini-game in The Legend of Zelda: Ocarina of Time, to the sublime arcade highs of Sega Bass Fishing, most re-imagine fishing to offer a more action-packed, immediate experience.

Dovetail games, the studio most famed for its rail and flight simulators, has explored the fine art of standing by a pond with 2014’s Euro Fishing. That game hinted that a serious fishing simulator could appeal to more than just the die-hard angler. But while it pleasantly surprised many who tried it, it didn’t quite captivate the masses. Now Dovetail is back with Fishing Sim World, which picks up where Euro Fishing left off, adding a great deal more luster and nuance.

The result is definitely a simulator, even if it’s one quite atypical of most titles that focus on realistic control, response and movement. It is most often large and industrial machinery that simulators endeavour to bring to life. With those contraptions one can find wildly intricate control panels and elaborate mechanisms with a raise of specific functions; perfect fodder for a stern simulation game where action-orientated gameplay just won’t do the subject matter justice.

But a fishing rod? As high-tech and ornate as they get, they’re fundamentally simple devices. At least, that’s the case relative to the cabin of a freight train’s locomotive as seen in Dovetail’s Train Sim World. Fishing, really, is about hunting via intuition and skill using simple implements. Because while there are some mechanically masterful reels available today, to fish is to communicate with the physics of water through a hook on a line strung to a pole.

And it is there that the Fishing Sim World team have made one of the best design decisions behind the game. Because while it replicates how the sport’s equipment works, it is really a simulation of handling a rod and battling to land a fish. As for actually casting off the line and placing the hook in just the right place, there are simplified and fully fledged controls – the former offering a more accessible but less-nuanced technique. While the basic approach apes the timing bar systems most commonly seen in golf games, where well-timed button presses dictate power and accuracy, going with ‘Total Cast Control’ presents a system where avatar body movements and environmental physics dictate your success. That means passing and flicking the rod through a well-plotted arc and releasing the reel at just the right moment.

However, it’s when the bait hits the water that the game really starts. Using rod position, line tension, reel speed and the timing of your movements, bait can be set at different depths, pulled through the water to represent the movements of live fish, and generally manipulated to attract prey. Once a bite happens, a precise jerk of the rod is needed to set the hook in place in the fish.

After that a peculiarly frantic dance begins. At once you need to keep the line tense and the hook in place, without placing so much pressure so as to snap the cord and lose your potential catch. As the fish pulls in different directions, you’ll also need to constantly switch rod position, while simultaneously adjusting tension on the reel. And once in a while, you’ll even land the fish in question.

Those moments really are exciting, and absolutely do work because of the quiet before the storm. It does seem that Fishing Sim World passes a few more fish near your bait over time than in real life, but there really is some waiting to be done, and plenty of time will be put into casting the line, reeling it back in without a hint of scaley attention, and finally resetting it and starting that core mechanical loop anew.

There’s a bounty of water physics and fish AI going on in the depths, and that surely makes wrangling your prey all the more rewarding once you understand it. But it can take a good deal of floundering before you really connect with the invisible system beneath the water’s surface. Once you do, however, there’s certainly a sense that there’s life to the submerged realms of fishing Sim World, and that different fish do behave differently. That core mechanism of casting and catching is all entirely workable, and delivers moments of great excitement – albeit ones well divided by quiet stretches. That, however, is only really half of Fishing Sim World. Because it’s equally a strategy game.

To find the type of fish you’re after will take analysing the world around you to find the right habitats, picking the ideal equipment, and selecting the best spot from which to cast off, leaving able space for the battle of reeling in a catch. There are myriad rods, baits, lures and floats to chose from, and 18 species of fish – which will each behave distinctly and prefer different surroundings.

As such, to succeed is to learn the language written in the game’s scenery; another element of real fishing the game simulates well. Looking for bass? You’ll want to keep an eye out for tucked-away spots under reeds and around rocky outcrops, where trees and other taller elements provide additional cover. Depending on your location, you’ll also have access to a range of boats, which can sport fish-detecting scanning equipment as well as proving a means to cast off away from the shore.

The strategy element is actually rather engrossing, and once you start to understand your prey and how to spot the signs of their presence, Fishing Sim World provides a reminder that its subject sport is most rewarding when it provides a means to find mastery over hunting

There are a number of different fishing styles to best, too, across seven different locations. These range from expansive sport lakes to the winding terrain of the UK’s iconic Grand Union Canal. Through the various waterways there is enough terrain to keep the challenge varied, but each is presented with such staid realism that they’re far from beguiling.

Indeed, the game’s devotion to simulator convention means that, visually, the entire experience is rather lacking in any kind of flair, or even tone. Unless ‘sterile’ is a tone. There’s a good deal of polish evident; it might just be that so much has been done to buff up the environments that the grittier elements of realism have been scrubbed away.

Fishing Sim World also struggles with variety. It makes a fine effort at giving you different frameworks in which to play. There’s online and offline timed tournaments with different objectives and focus, online multiplayer, open fishing and various other ways to play. Yet the pacing and energy of the game never really changes as you hop between scenarios.

If you like fishing in reality – and are also open-minded to digital pursuits – there’s a very good chance you’ll be delighted by the detail Fishing Sim World delivers. There’s enough reel, bait, line and rod types to keep you busy exploring your hobby for hours, and plenty of reasons to use the gamut of hardware available. If you sit in that audience you’ll likely find that Dovetail’s creation suits numerous shorter play sessions over many weeks. And throughout, you’ll be delighted by all the fishing authenticity.

If you’re not devoted to casting off into real water, there’s still some pleasure to be found in Fishing Sim World. In it’s best moments it’s as surprisingly dramatic as it is wonderfully relaxing. For those who don’t mind life moving slow, it’s a brilliant antidote to a hectic world already well-served with hectic video games. But if you want to be dazzled by action and bathed in the gaudy light of fantastic worlds, it’s very likely that this homage to hook and line will leave you feeling significantly underwhelmed.

Fishing Sim World welcomes those who want to take its subject matter seriously, and throws its arms open to players who don’t mind life slowing down. But if you’re here for unbridled fun and explosive action? This probably isn’t even the right genre for you.