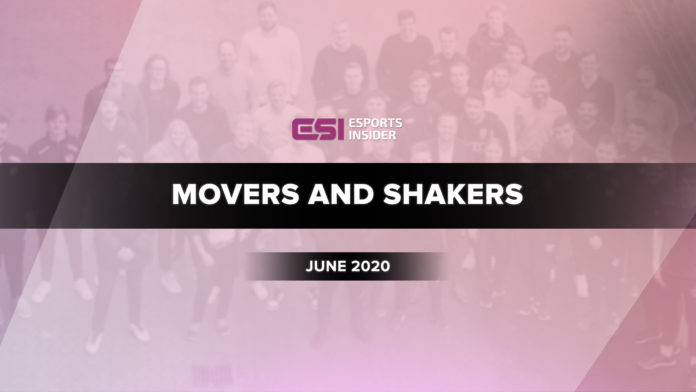 The esports industry effectively grows by every metric, as do the companies and organizations that inhabit it. This entails new employment opportunities and promotions. Since the corona virus affects the business of most companies, there are also changes in this regard.

After Esports Insider tracks the key personnel changes in the industry, we will compile the largest personnel developments each month. Here are the Esport makers for June 2020.

YouGov hires Nicole Pike as the esport and gaming lead.

Pike joins YouGov after a 13-year tenure with Nielsen, another data and measurement company. Headquartered in the United States, she will lead YouGov's analysis in both sports and gaming as the company seeks to increase its activities in the industries.

Christopher "MonteCristo" Mykles became Commissioner of Flashpoint and Vice President of Brand for the Parent company B Site appointed.

In his new role as VP of Brand, Mo. nteCristo will take over all B Site initiatives from a brand perspective, including Flashpoint, its content platform and future events. In addition, he will be personally responsible for the development of new tournaments for B Site, as these are to be expanded into titles in addition to Counter-Strike: Global Offensive.

The tournament platform and organizer FACEIT entered the college esports scene in the United States and hired a dedicated job for the company.

The new FACEIT Collegiate Esports Division is led by Duran Parsi, the founder of the Collegiate Star League (CSL). Parsi founded CSL during his studies in 2009 and was CEO of the company until his departure in April.

Having also had a career as a filmmaker in Hollywood, Luna had tried to "transform the organization from a player to a player".

In this role, Howard will be the "driving force" behind TalentX Gaming's efforts to attract prominent esports, gaming and online entertainment customers.

In addition to his current position as head of brand sponsorship at Nielsen Sports, following Nicole's departure, Yazge will now be responsible for leading commercial sales and customer service for Nielsen's Esports business.

Towards the end of 2016, she switched from Halle to ESL and was initially marketing manager. After a little over a year in the post, she became a commissioned observer of Counter-Strike: Global Offensive for the tournament organizer. Almost two years later, she took on the role of Lead Event Marketing until she became Director of Consuming Marketing earlier this month.

The North American organization 100 Thieves has hired Jeremy Azevedo as VP of Content.

Eckard worked with 100 thieves, worked on branding and merchandise design for the streamer Michael "Shroud" Grzesiek and helped with branding, the user interface and the user experience for the music streaming app Pretzel Rocks.

Video: How Pokémon Snap Replaced Its Blockbuster Collaboration On Wii & Wii U